Skip to the end of the images gallery

Skip to the beginning of the images gallery

Enhanced with the soothing scent of Dutch tulip and the relaxing fragrance of Japanese Yuzu, blended with exotic spices...Show more
Out of stock
Description

Enhanced with the soothing scent of Dutch tulip and the relaxing fragrance of Japanese Yuzu, blended with exotic spices and warm sandalwood, you can enjoy this sunflower wax candle for up to 50 hours. Featuring the iconic Delft Blue design of Amsterdam Collection, get ready to experience the most beautiful effect when this candle is lit. Feel yourself relax as you breathe in the delicate fragrance.You can also reuse the pretty glass jar to store keepsakes or kitchenware. Order now from the official webshop.

TULIP : A flower that can be found everywhere in Holland, one that’s now become a national symbol for the Netherlands. However, when the Tulips first arrived in Amsterdam from the Ottoman Empire, these beautiful flowers were viewed as a true luxury. JAPANESE YUZU: Native to eastern Asia, yuzu is both a citrus tree and a fruit. Valued for its wholesome nutrition, yuzu juice is often used for relaxation. Extremely rich in antioxidants, it is known for its soothing and skin conditioning properties.

Shipping and Return
How To Use

When you light the candle for the first time, let it burn for at least 2 hours to melt the top layer for an even burn. 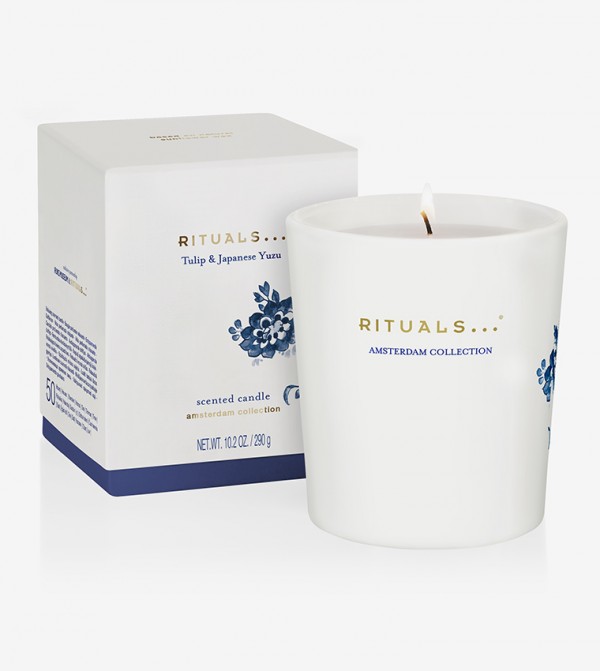